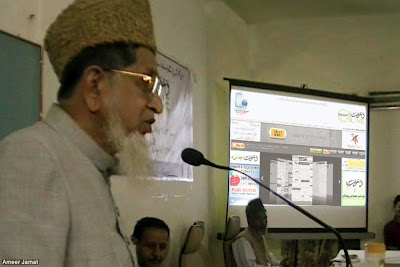 “Media is supposed to be engaged in mind building of the society on positive values. But today it hardly cares and s

eldom raises its voice against the violation of ethical and moral standards. In addition, the mainstream media also shows its bias against Muslims”, said Amir Jamaat e Islami Hind, Maulana Syed Jalauddin Umari, while inaugurating the Dawat website, www.dawatonline.com in New Delhi on 4 April, 2009. He called the gathering to ponder over the ways of getting our due share in the media. He also stressed upon the necessity of having our own media apart from our close interaction with the mainstream one.
Earlier, Sheikh Manzoor Ahmad, the head of UNI, released the special issue of Dawat entitled “Sixty Years of Jamaat e Islami Hind: In the Eyes of its Elders”. He said the Jamaat was the most serious organization of India, but few people knew about it. Muslim in the country have continuously been marginalized throughout the last three decades, he lamented highlighting the inevitability of documentation.
In the beginning of the simple ceremony a brief history of the newspaper was presented by its Editor in chief, Mr Parvaz Rahmani. The Secretary of Dawat Trust, Mr Rafiq Ahmad presented the vote of thanks at the conclusion of the programme. It was attended by a large gathering of people including a sizeable number of media persons.
Posted by dawat online at 4/04/2009 01:30:00 pm